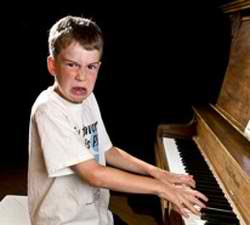 Parents may not want to invest a lot of money in a piano.  After all, the child may lose interest and a cheaper, older piano may seem the logical choice.  However, a bad purchasing decision at this point in a student’s learning journey tends to be a self-fulfilling prophecy.  In many cases a piano that is too old, or simply not good enough will soon become useless to the student, unbeknownst to he parent.  When a piano’s action cannot be regulated to the correct touch, or the strings tuned to proper pitch, the student, unable to duplicate what was taught in a lesson, will become frustrated, discouraged, and will lose interest.  No amount of practice on an inferior instrument can overcome its shortcomings.  And, when you add the cost of moving, tuning, repairs, lack of warranty protection, and an older piano’s shorter life span; a new or more recently made piano may start to look like a bargain in the long run.

I would encourage a family to look at quality new pianos, or better used pianos no more than 15 years old.  And a young talented student, moving up to a quality grand piano is never a mistake.  If an older piano is chosen, it should be one that was of good quality to begin with, and restored to like-new condition.

Although good and bad pianos have been made, every used piano must be evaluated on its own merit.  Certain categories of pianos in today’s market should be avoided.

The used piano market also offers many well made pianos from the past, that are of potential value to a student.  But even these, including famous names, can also present pitfalls for the unwary.  Don’t buy without professional guidance, a piano that is not playable and keep a tune, with the idea that you can simply have a few repairs done once you get the piano home.  Get repair estimates before you commit to purchasing a used piano.  Finally, don’t rely on a private seller for important information about the piano you are thinking of buying.  Hire a piano technician to inspect any piano you’re seriously considering buying.

Better yet, visit a local piano store and talk to a sales associate.  The majority of them are very honest and would be happy to answer any questions.

There is hardly anything in the world that some person cannot make a little worse and sell a little cheaper, and people who consider price only are this person’s lawful prey.  J Ruskin