The month of February is Black History Month. All month long we will be celebrating African-American musicians from the last 100+ years! Today we are highlighting Alicia Keys!

Alicia Keys was born in 1981 as Alicia Augello Cook. She is an American singer-songwriter and pianist from New York City. Her father is African-American and her mother is of Sicilian and Scotch-Irish descent. Keys recalls feeling comfortable growing up in a multiracial family as it allowed her to relate to wider groups of people. The arts have been ingrained in Alicia Keys since her childhood. She made an appearance in The Cosby Show at the age of four. Under her mother’s encouragement, she began taking classical piano lessons at age seven. Keys enrolled in the Professional Performing Arts School by the age of twelve, and graduated as the school’s valedictorian at sixteen. She signed with Columbia Records at the same time she enrolled in Columbia University, but dropped out of college after a month to pursue a career in music.

Keys’ first musical successes came from singles on movie soundtracks, which included Men In Black, Shaft, and Dr. Dolittle 2. Her talent gained significant traction and she released her first studio album in 2001, entitled Songs in A Minor. The record had influences from different genres like classical piano, blues, soul and jazz. Songs in A Minor debuted at #1 on the Billboard 200, and its popularity led to five Grammy awards and made Alicia Keys the R&B Artist of the Year. Her second album, The Diary of Alicia Keys, also debuted at #1 in 2003. Her single “You Don’t Know My Name” won Best R&B Song, and the album won Best R&B Album at the 2005 Grammy Awards. 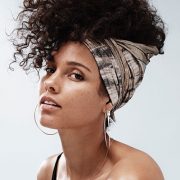 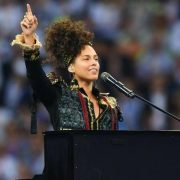 Unplugged was Key’s first live album, third overall, and was released in 2005. The album again debuted at #1, making a perfect three-for-three start for Keys. Unplugged was recorded as part of the television series MTV Unplugged, and became the first album from the series to debut at #1 since Nirvana’s MTV Unplugged in New York in 1994. Keys’ fourth album, As I Am, debuted at #1 as well in 2007. The album’s single, “No One”, won a Grammy for Best R&B Song. Keys released The Element of Freedom in 2009, which broke her string of consecutive #1 albums debuting at #2. Out of the six singles released from that album, “Un-Thinkable” performed the best, topping the R&B charts for twelve straight weeks. Girl on Fire was released in 2012, with the title track reaching #7 on the R&B charts and #11 on the Billboard Hot 100. The album was written in response to Keys’ marriage to rapper Swiss Beatz and the birth of their son.

Keys maintains a lifestyle of social activism in addition to her busy performing schedule. She co-founded the group Keep A Child Alive to provide support for families with HIV and AIDS in Africa. She has protested issues of poverty, women’s oppression, and budget cuts in education, and has performed at benefit concerts following September 11, the 2010 earthquake in Haiti, and several concerts in connection with the Keep A Child Alive organization. Keys’ musical output has netted her 15 Grammy Awards, 17 NAACP Image Awards, 9 Billboard Music Awards, and 7 BET Awards. She has been named one of the “100 Greatest Artists of All Time” by VH1. She continues to accumulate recognition and awards with her multifaceted talents and her philanthropic endeavors. At only 37, Keys is sure to produce more award-winning music.

Check out the video below of Alicia Keys’ official music video of “Girl On Fire.”