The month of February is Black History Month. All month long we will be celebrating African-American musicians from the last 100+ years! Today we are highlighting Aretha Franklin!

Aretha Franklin was born in Memphis, Tennessee, in March of 1942. She was dubbed the “Queen of Soul” because she was able to bring Black Gospel-Rooted Rhythm and Blues music to its fullest potential when others couldn’t. Due to her mother being a gospel singer she grew up in around music. Her father accepted a preaching job at a church in Detroit, and moved the family there around the time Aretha was five. She taught herself how to play the piano by ear and she started singing in front of the congregation at her father’s church.

When she was 14, she released her first album, “Songs of Faith”, under her father’s management, and began travelling with her father’s revival show to perform in front of other congregations. She was able to make connections with other already well-established gospel singers such as Sam Cooke. She confided in her father that she aspired to make pop music and she wanted to follow Sam Cooke to New York to fulfill that dream. Her father obliged and helped her sign with Columbia Records. Her first album with the label was called Aretha: With The Ray Bryant Combo, which included a hit single that made it to the Billboard hot 100. Between 1961 and 1966, Franklin produced several albums, but had only achieved minimal success so she left Columbia Records to sign with Atlantic Records. With the new label she quickly cranked out the single, “I Never Loved a Man (The Way I Love You)“, which was an instant hit. 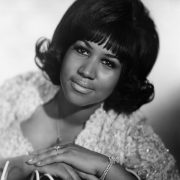 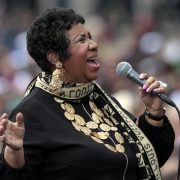 In 1968, she had two top selling albums, “Lady Soul” and “Aretha Now”. She also won her first two Grammys and appeared on the cover of “Time” magazine in that year. In the late 60’s she really hit her stride and released several singles that would become timeless classics such as “Spanish Harlem”. She also released her album I Never Loved a Man (The Way I Loved You), which included one of her most well-known hits, “Respect.” Her major success and continually topping the charts gave her the well earned nickname the “Queen of Soul”. In the 70’s, she won a total of eight Grammys, but she also experienced the death of her father and took a brief hiatus from her career. She soared back into action in the mid 80’s with the release of her album, “Who’s Zoomin’, Who” and “Aretha” which became a gold record.

Aretha’s personal life was somewhat marred by the young age she experienced stardom. She was exposed to a lot of adult behavior on the road, which led to her having children at a very young age. She was married twice and divorced both times. She was also good friends with Dr. Martin Luther King Jr. and was very involved in the civil rights movement. “Respect” was seen as the anthem for the Civil Rights and feminist movements. Despite being forced to grow up at such a young age she enjoyed a long and very successful career. She was the first woman inducted into the Rock and Roll Hall of Fame. The “Queen of Soul” won 18 Grammy’s in her career and announced her retirement in 2017.

Check out the video below of Aretha Franklin performing “Respect.”