The month of February is Black History Month. All month long we will be celebrating African-American musicians from the last 100+ years! Today we are highlighting B.B. King!

Riley B. King was born in 1925, near Indianola, Mississippi. His interest in music started early on, inspired by the worship music of the Elkhorn Baptist Church and the Pentecostal Church of God in Christ. King learned guitar and played on street corners for money, and would occasionally play in as many as four towns in one night. In 1947, King moved to the Memphis area to pursue a career in music. Memphis was a hub of musical activity, and especially supported all types of African-American music. King performed on Sonny Boy Williamson’s radio show in 1948, which led to many engagements in clubs and radio stations around the Memphis vicinity. King used the name Beale Street Blues Boy for his radio personality, which was shortened to Blues Boy King, and eventually he just became known as B.B. King.

King was performing at a dance in Arkansas in the mid-1950’s when a fight broke out between two men. In the heat of the fight, a kerosene stove was kicked over, which set the hall on fire. After King was safely outside, he realized his beloved guitar was still inside the burning building. He ran back in to grab his guitar and barely made it out alive. King later found out the two men were fighting over a girl named Lucille, so he gave his guitar the same name to “remind him never to do a crazy thing like fight over a woman.” Each guitar he ever played after this was given the name Lucille. 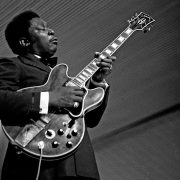 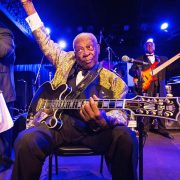 In 1952, King released his first number one hit, “Three O’Clock Blues”. Soon after this, he and his band began touring nationally. They played a relentless string of 342 one-night stands in 1956. King’s style transitioned seamlessly between vocals and instrumental solos, and mixed traditional blues, jazz, swing, and pop music, which provided heavy influence to guitarists like Eric Clapton and George Harrison. Some of King’s biggest hits included “You Upset Me Baby”, “Every Day I Have The Blues”, “Don’t Answer The Door”, “Why I Sing The Blues”, and “The Thrill Is Gone”. He was given the nickname “King of the Blues” in part because of his last name, but mostly due to his mastery of the blues guitar.

B.B. King toured extensively for over fifty years, from the small cafes and country dance halls of the Chitlin’ Circuit to larger venues like rock palaces, concert halls, amphitheaters and universities. He embarked on a “farewell” tour, which began in 2006, but kept playing occasionally after the tour was officially over. Some of King’s many accolades include: Blues Foundation Hall of Fame, Rock and Roll Hall of Fame, Grammy Lifetime Achievement Award (in addition to 15 Grammy Awards), National Award of Distinction from the University of Mississippi, Kennedy Center Honors, Presidential Medal of Freedom, and honorary doctorates from Brown University, Berklee College of Music, and Yale University. B.B. King died in his sleep in May of 2015, at the age of 89.

Check out the video below of B.B. King performing “The Thrill Is Gone.”