The month of February is Black History Month. All month long we will be celebrating African-American musicians from the last 100+ years! Today we are highlighting father/daughter duo Natalie and Nat King Cole.

Bessie Smith was born in Chattanooga, Tennessee in April of 1894. She has been heralded as one of the greatest singers of the early 20th century, and became known as the “Empress of the Blues”. Smith and her siblings would sing and dance in the streets as children to earn money for the family. Her older brother Clarence was on tour with a travelling troupe when he set up an audition for her to join in 1912. Although Bessie was mainly known for her voice, she was given a role as a dancer as the troupe already had the well-known Gertrude “Ma” Rainey as its singer. Smith worked her way into various singing roles on the Theatre Owners Booking Association (TOBA) circuit. Bessie Smith’s recording career began in 1923, when Columbia Records signed her to a deal. Her first recording included “Downhearted Blues”, which became her most popular hit. Other hit records included “Gulf Coast Blues”, “Backwater Blues”, “St. Louis Blues”, “Careless Love Blues”, and “Nobody Knows You When You’re Down And Out”. Through her records and performances, Smith became the highest-paid African-American entertainer in the 1920’s. 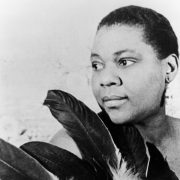 Bessie Smith’s personal life was ideal for a blues singer, in that it was not ideal at all. Growing up poor, black and female provided plenty of inspiration for Smith to sing the blues. She married Jack Gee while living in Philadelphia in 1923, but the marriage was rocky to say the least. Infidelities by both partners, along with Smith’s bisexuality, created an unhealthy relationship that Smith eventually ended in 1929, when Gee had an affair with another singer. Though the two never divorced, Smith entered a common-law marriage with Richard Morgan, with whom she remained until her death in 1937. Smith was involved in a serious automobile accident, which led to severe trauma, blood loss and an amputation of her right arm. She never recovered from the amputation and died in a Clarksdale, Mississippi hospital the morning after the accident.

The Empress of the Blues lived a brief life, but one that has had a lasting impact on American music, let alone African-American music. Her blues texts spoke of oppression from varying viewpoints of poverty, sexuality, and black feminism. Bessie Smith’s vocal blues style influenced singers like Billie Holiday and Ella Fitzgerald.

Check out the video below of  Bessie Smith singing “Downhearted Blues.”