The month of February is Black History Month. All month long we will be celebrating African-American musicians from the last 100+ years! Today we are highlighting Billie Holiday!

Born Eleanora Fagan, Billie Holiday (1915-1959) was a talented jazz singer who got her start singing in Harlem’s night clubs. Though she never received formal music training, the strength and raspy quality of her voice make it one of the most recognizable in jazz music. She was heavily influenced by Bessie Smith and Louis Armstrong and often mimicked instrumental improvisation when singing. Some of her best known hits include “God Bless The Child”, “Strange Fruit”, “Them There Eyes” and “Lady Sings The Blues”. Holiday received the nickname “Lady Day” from saxophonist Lester Young. Lady Day’s style was influential to several musicians; perhaps most notably was Frank Sinatra. 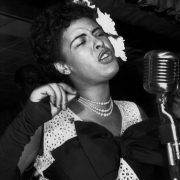 Holiday did not experience the same successes personally as she did professionally. She began using drugs in the late 1930’s and was arrested on a couple occasions for possession of narcotics in the late 1940’s. She appeared in court in 1947, but her lawyer informed her he would not represent her. Holiday was sentenced to a year in prison, putting her career on hold. Once she was released on good behavior, her manager arranged for a concert at Carnegie Hall. Though she initially had reservations about a major performance after her arrest, Lady Day agreed to the concert and performed to a full house. Despite the continued legal trouble from her drug and alcohol abuse, Holiday remained one of the most sought-out performers of her time. Her health declined throughout the 1950’s, and in 1959, Billie Holiday spent the last month of her life in police custody while lying ill in a hospital bed. The tragic story of Billie Holiday does not at all diminish the legacy of Lady Day, one of jazz music’s all-time greats.

Check out the video below of Billie Holiday singing “The Blues are Brewin’.