The month of February is Black History Month. All month long we will be celebrating African-American musicians from the last 100+ years! Today we are highlighting Charlie Parker!

Charlie Parker (1920-1955) was an American saxophonist who was more commonly known as “Yardbird.” As a teenager Charlie played the baritone horn in the band at his school until his mother bought him his first alto saxophone when he was 14 to cheer him up due to his father abandoning his family. He took to the saxophone largely due to him being a fan of Lester Young. He took lessons in school and was soon playing at local clubs with some local big bands and in 1935, he decided to drop out of school and make music his professional career.

From 1935 to 1939 he played with local jazz and blues bands in nightclubs including playing with Buster Professor Smith’s band in 1937, and pianist Jay McShann’s band in 1938. The latter allowed him to tour in Chicago and New York as well as recording his first solo. In 193, he decided to stick around New York for a while to further pursue his musical career. To make ends meet he was forced to hold other jobs such as being a dishwasher. 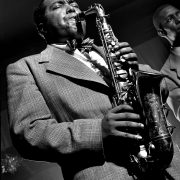 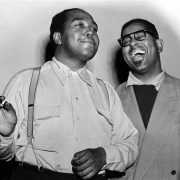 In 1942, Parker left McShann’s band to join Earl Hines and this is where he met Dizzy Gillespie. Parker and Gillespie began experimenting with their music, which lead them to create the genre of bebop. In 1945, he and Gillespie formed a 6-week nightclub tour around Hollywood. Not only was he doing this with Gillespie, but he was also leading his own band. He decided to remain in Los Angeles to perform until the Summer of 1946.

In 1947, he decided to return to New York and he formed a quintet with which he performed some of his most well-known hits like “Cool Blues.” From 1947 to 1951, he was pretty busy performing in many ensembles and soloed at a lot of different venues. He also signed with three different record labels in that time as well as making his European debut in 1949, at the Paris International Jazz Festival. During this same time back in New York the Birdland Club was being named in his honor. In 1955, he made his last public appearance at the Birdland Club. Sadly, he died a week later due to serious health issues brought on by heavy alcohol and drug use at the age of 35. Due to his innovative ways with jazz music he became a Grammy Award winner and will forever be remembered for how he helped change Jazz music.

Check out the video below of Charlie Parker playing “Yardbird Suite” on Saxophone.