The month of February is Black History Month. All month long we will be celebrating African-American musicians from the last 100+ years! Today we are highlighting Chuck Berry!

Charles Edward Anderson Berry, more commonly known as Chuck Berry, was born in St. Louis, Missouri, on October 18, 1926. His influence on Rhythm and Blues and Rock and Roll music spanned three decades from the 1950’s- 1970’s. At the time of his birth, St. Louis was a completely segregated area. Berry lived in a middle-class African-American area called the Ville. The city in fact was so segregated that Berry did not know that white people existed until he was three when he saw fireman putting out a fire. He recounted a story later on in life saying he thought they were so scared their faces turned white.

He was the fourth of six children and was involved in several hobbies growing up but his passion for music started when he was six and he sang for his churches choir. Berry attended the first all-black high school west of the Mississippi River, and it was there he gave his first performance for the school’s talent show singing Jay McShann’s “Confessin’ the Blues.” It was a huge hit with the students and it ended up sparking his interest in guitar and he started guitar lessons with Ira Harris. Unfortunately, due to Berry’s rebellious ways he was not able to graduate high school because he ran into some trouble with the law. He was sent to Intermediate Reformatory for Young Men at Algoa from 1944 to 1947. 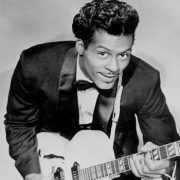 Upon his release he got a job on the assembly line at General Motors Fisher and went to cosmetology school at night as well playing the guitar again. In 1951, a high school friend asked him to join his band. They played the nightclub scene and he quickly became known for his showmanship. He met Jonnie Johnson and joined his trio in 1952. Berry helped revamp the trio’s sound by adding upbeat country numbers to their playlist. The Cosmopolitan, which had been an upscale African-American club, started attracting more and more white patrons. Berry was in search for more success so he started making frequent road trips to Chicago because it was the Midwest Capital of Black Music. He happened to meet musician Muddy Waters who introduced him to Leonard Chess, owner of Chess Records. He played Chess a demo tape that included what was then called “Ida Red” and was later renamed to “Maybellene.” He was almost immediately offered a contract and “Maybellene” quickly rose to the top of the charts. In the late 50’s he had a slew of hits produced most of which we still listen to today such as, “Sweet Little Sixteen” and Johnny B. Goode”.

Berry was great at making music that people on both sides of the racial divide could enjoy ,and he achieved this by melding R&B and and blues together and telling stories with his lyrics that all people could relate to. His career was soaring until he hit a major roadblock which derailed his caree. He once again had a run in with the law which sent him to prison for three years. His close friends said this stint in jail really changed him. A once easy-going and fun guy turned cold and bitter which seems to have been a reaction to how he was given an unfair trial and treated poorly due to him being African-American. Upon his release he picked up right where he left off and the British Invasion as it is commonly referred to only made his return that much easier. British bands like the Beatles had been doing covers of his songs or reworks of his hits. In 1964-65,  he produced eight singles that were popular for a brief time but did not have the same lasting effects that his previous hit did. Some of those singles were “Nadine” and  “You Never Can Tell”.  He did have some success becoming more of a nostalgic performer and would perform covers of his own hits with other bands. His last album, “Rock It” was done in 1979. It was only mildly successful. He did however record a number one single, his only number on single at the time called “My Ding-A-Ling”.

In the 80’s Berry continued his one-nighter tours requiring a local band to accompany him at each city. His work unfortunately became sloppy which tarnished his reputation. In 1985, he received a Grammy lifetime achievement award. The Rock and Roll Hall of Fame was opened in 1986, and Berry was one of the first nominated and the first to be inducted. He is credited for laying the groundwork for what we have come to know as Rock and Roll. In June of 2017, his last ever album titled “Chuck” was released and was dedicated to his wife of 68 years, Toddy. Berry died of cardiac arrest in his home on March 18, 2017. Berry was known as the father of rock and roll. He paved the way for other musicians in the genre.

Check out the video below of Chuck Berry playing “Johnny B. Goode” on guitar.