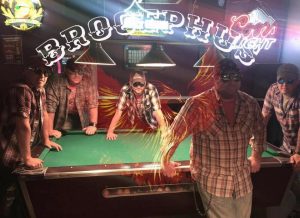 Brocephus is a modern country cover band based out of Cincinnati Ohio. They focus on the current hits from today while mixing in a touch of the classics. Brocephus provides a high energy performance and pride themselves on treating every event as if it were a sold out arena. The band is comprised of veteran musicians from around the area who have joined together from some of the most well known acts around. Brocephus is performing around the midwest from festivals and fairs to private events and weddings.

Chris Wilson – Vocals. Chris brings his vocal talents from Memphis where he was one of the premier Elvis impersonators. His showmanship and command of not only his voice but the stage and crowd is an asset to Brocephus.

Chip Stewart – Vocals/Bass. Chip is not only the mastermind behind Brocephus but he is the work horse as well. He comes from several highly successful cover bands (My sister sarah, Marsha Brady, The Monday’s) from the Cincinnati area. His vocal and bass ability is only matched by his drive for success and his knowledge of production and stage management. Chip helps round out the harmony and adds excitement to the live show.

Billy Carri – Vocals/Guitar. Billy has literally done it all. From being signed to a label in the 90’s, touring the country as a singer/songwriter to being a member of the Armed Forces Entertainment Network playing over seas for the troops to running his own recording studio and producing local bands. He brings his vocal ability and guitar work along with his amazing stage presence to Brocephus allowing for spot on harmony and a visual spectacle.

Sunil Munger – Guitar. Sunil is a graduate of The Atlanta Institute of Music where he studied guitar. He is one of the Premier guitar instructors in the Cincinnati area and brings a vast knowledge of theory and structure to Brocephus. He also comes from the highly successful My Sister Sarah and Lounge Lizards cover bands. Having Sunil allows Brocephus to have a guitar flare thru songs that is 2nd to none.

Eric Mayleben – Drums. Eric is the foundation on which all things Brocephus is built. Eric brings his vast experience from a touring rock musician who has been signed, shot videos appearing on Mtv to being a drum instructor here in the area. His showmanship and timing never clash, in fact they’re in perfect sync with each other providing a solid groove for the band and a fun show for the crowd.

Now that you have met the band, go check them out on Facebook, Twitter, Instagram, anywhere you can find them online! Come in to Willis at Moeller Music West Chester and show an associate that you “Liked” their music page on Facebook and receive discounts!

Brocephus keeps their fans updated with the latest news, music, merchandise, promotions and whatever through various social media accounts. Some accounts are exclusive to certain media.