The month of February is Black History Month. All month long we will be celebrating African-American musicians from the last 100+ years! Today we are highlighting Count Basie!

William “Count” Basie (1904-1984) was a jazz pianist and bandleader from Red Bank, New Jersey. His mother forced him to take piano lessons from a young age, an investment of $0.25 per lesson. Basie’s father was a caretaker for a wealthy local judge, whose daughter also encouraged young William to practice on their family’s piano. Basie had dreams of becoming a drummer, until Sonny Greer – who later became the drummer for Duke Ellington’s band – came in from nearby Long Branch, New Jersey. He praised Greer’s drumming as “the sharpest thing anybody around that part of New Jersey ever heard.” Basie dropped out of school as a teenager to focus on music. He played at various clubs around Red Bank before moving to Harlem in 1924, where he joined several touring groups. Basie joined the Blue Devils in 1928, one of the earliest big bands. Basie himself said that hearing the Blue Devils for the first time was one of the defining moments of his life as a musician. “Everything about them really got to me, and as things worked out, hearing them that day was probably the most important turning point in my musical career so far as my notions about what kind of music I really wanted to try to play was concerned.” 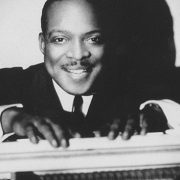 In 1929, he moved to Kansas City to join Bennie Moten’s band, performing in the “Kansas City Stomp” style. After Moten’s death in 1935, Basie started his own group called the Barons of Rhythm, which would later become the Count Basie Orchestra. Under Basie’s leadership, the group included several big names in jazz such as tenor saxophonist Lester Young, guitarist Freddie Green, and vocalist Jimmy Rushing. Well known blues singers Billie Holiday, Big Joe Turner and Helen Humes were also featured with the band.

During his nearly half-century career, Basie and his Orchestra toured extensively throughout the major cities of the United States and added a few international tours in Europe. His legacy as one of the most towering figures in jazz music continues to influence jazz musicians in the 21st century. The Count Basie Theatre was named in his honor in his hometown of Red Bank, New Jersey. He received an Honorary Doctorate from the prestigious Berklee College of Music in 1974 and a Grammy Lifetime Achievement Award posthumously in 2002. Count Basie died in 1984.

Check out the video below of Count Basie and his orchestra playing, “Basie Boogie.”