The month of February is Black History Month. All month long we will be celebrating African-American musicians from the last 100+ years! Today we are highlighting Dizzy Gillespie! 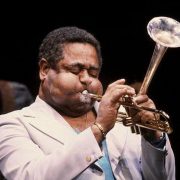 John Birks Gillespie (1917-1993) was given the nickname Dizzy because of his humorous antics on and off the stage. He was the youngest of nine children and was introduced to music at a very young age. His father was a bricklayer by trade, but also a band leader and introduced his children to many different instruments. Dizzy taught himself how to play the trumpet and the trombone and received a music scholarship to Laurinburg Institute in North Carolina. When he was 18, he and his family moved to Pennsylvania where he received his first professional music job with Franky Fairfax’s band. Dizzy is most well known for his “swollen cheeks” when playing as well as his signature angled trumpet bell.

Gillespie’s idol early on was Roy Eldridge, whose influence comes through in Dizzy’s style. A few years after joining Frany Fairfax’s band he moved to New York where he was able to take Roy Eldridge’s spot as first trumpet when he left the Teddy Hill Orchestra. It was with this Orchestra he was able to make his first recording, “King Porter Stomp.” He played with Teddy Hill’s band for a year until he left and played with many other bands like Cab Calloway, Ella Fitzgerald, Earl Hines, Duke Ellington, and Billy Eckstine from 1937-1944. When he played with Cab Calloway’s band in 1939 he was able to record his first composition, “Pickin’ the Cabbage.” Gillespie worked with Charlie Parker to form the musical genre known as bebop. This was the first modern Jazz style and was not popular at first. Bebop music sounded extremely different that Swing music which was the popular genre at the time. Parker and Gillespie worked together in several bands in the 1940’s and early 50’s pioneering the new bebop style.

Gillespie was also one of the first to incorporate Afro-Cuban, Caribbean and Brazilian rhythms with jazz. Gillespie wanted to lead his own big band and after a couple of unsuccessful tries he finally found one that worked and led one from 1946-50. During this time at a party someone accidentally sat on his trumpet bending it into a 45 degree angle and he liked the sound it made so much he decided to keep it and have all of his trumpets from then on custom made like it and it became his trademark.

During the 1964 Presidential campaign, Gillespie wrote himself in as a candidate as a joke and said he would fill the cabinet with some of the greatest jazz musicians of all time like, Louis Armstrong, Thelonious Monk, and Duke Ellington to name a few. His booking agent had campaign buttons made a couple of years prior as a publicity gag but he decided any profit made from them would benefit the Congress of Racial Equality, Southern Christian Leadership Conference and Martin Luther King, Jr.

Gillespie received many honors for his contributions to music such as a Grammy Lifetime Achievement Award, an honorary doctoral degree from the Berklee College of Music, the Kennedy Center Honors Award, and the American Society of Composers, Authors, and Publishers Duke Ellington Award. 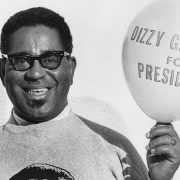 Check out the video below of Dizzy Gillespie and his quintet playing below.