The month of February is Black History Month. All month long we will be celebrating African-American musicians from the last 100+ years! Today we are highlighting Duke Ellington!

Duke Ellington is one of the most recognizable figures in all of music, let alone the jazz idiom. Born Edward Kennedy Ellington in Washington, D.C. in 1899, he received the nickname “Duke” due to his polite, noble demeanor as a child. His interests growing up were split between art, music and baseball, and it was not until his late teens when he decided to focus all of his creative energy into music. Ellington moved to Harlem and played at several clubs and other venues before landing extended engagements at the Hollywood Club and eventually the Cotton Club. While the Great Depression hit much of the music industry quite hard, Ellington and his orchestra continued its success and recorded such hits as “It Don’t Mean A Thing (If It Ain’t Got That Swing)”, “Mood Indigo”, “In A Sentimental Mood”, and “Caravan”. 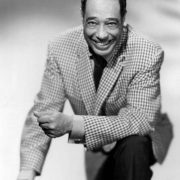 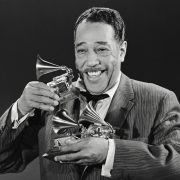 Duke Ellington made his Carnegie Hall debut in 1943, a concert where he debuted his long-awaited “Black, Brown, and Beige”. Ellington had been foreshadowing this piece in several interviews in the decade leading to its premiere, but had not put any ink on paper until the Carnegie Hall engagement had been booked. The work itself is an ambitious parallel to the African-American experience from slave songs to the blues to the present day of 1943.

Ellington’s compositional style was influenced by both classical and jazz music, and he often saw his music as non-categorical in that it could not be defined just by one genre. Author Terry Teachout noted that “Ellington was not the first jazz composer of distinction, but he was the first to write music that used the still-new medium of the big band with the same coloristic imagination brought by classical composers to their symphonic works.” At the time, this musical fusion drew as many harsh reviews from classical critics as it did positive reviews, but Ellington’s compositions have been performed and emulated by musicians around the world for almost a century.

Check out the video below of Duke Ellington playing “Taking the A Train” on Piano.