The month of February is Black History Month. All month long we will be celebrating African-American musicians from the last 100+ years! Today we are highlighting Ella Fitzgerald! 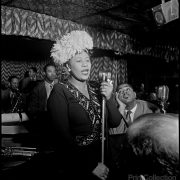 Ella Fitzgerald (1917-1996) was commonly known as “The First Lady of Song” and grew up in a poor Italian neighborhood in Yonkers, NY. In 1932, tragedy struck when her mother died from serious injuries from a car accident having a rough impact on her. She ended up living with her step father for a short time before moving in with her aunt. Soon she was performing poorly in school and began skipping classes before eventually getting into some trouble with the law. She was sent to a reform school but shortly left and found herself a 15-year-old girl broke and living on the streets during The Great Depression. To survive she would perform on the streets of Harlem until her luck started to look up.

She decided to perform at the Apollo Theater on one of their Amateur Nights as a dancer but she got scared due to a local dance duo and last minute and decided to sing in the style of Connee Boswell. She sang “Judy” and “The Object of My Affection” and ended up winning first prize which was $25. Chance would have it that Benny Carter was part of the band that played for amateur night and he was so impressed with her ability to sing that he began introducing her to others who could help launch her career.  In 1935, one of the prizes she won from the many talent shows she was in was a chance to sing with the Tiny Bradshaw Band at the Harlem Opera House and Chick Webb was there. Chick had already hired a male vocalist for his band but he gave Ella a test run as they performed at a dance at Yale University and said if the students liked her she was staying. While it was a tough audience to impress Ella’s sweet voice got the job done and he offered her a spot with the band making $12.50 a week.

Ella was given the opportunity to record several hit songs with the group but her first big success came from the nursery rhyme “A-Tisket, A-Tasket” that she co-wrote. She became the band leader of Webb’s band once he passed and renamed the band Ella Fitzgerald and Her Famous Band. She kept the band going from 1935 to 1942, and recorded 150 songs with them but left in 1942 to pursue a solo career. The end of the swing and big band era was coming to an end and bebop was on the rise so Ella started incorporating scat into her singing and she toured with Dizzy Gillespie’s band. She once told someone she was just trying to do with her voice what she heard the horns doing.

In the 50’s and 60’s is when Ella earned her nickname “The First Lady of Song” due to her growing popularity and unparalleled vocal talents. Her incredible talent of being able to mimic instruments helped pioneer scat singing. In 1955, Ella left Decca label and her manager Granz created his new label Verve specifically to produce albums with her. Granz had her record  Ella Fitzgerald Sings the Cole Porter Song Book and that changed Ella’s career for the better. With the help of Marilyn Monroe, Ella made history on March 15, 1955, when she was able to play at the very popular nightclub, Macambo. Marilyn called the owner and asked him to book Ella and told him if he did she would be there at a front table every night and he agreed to let her do it.

She was one of the first African-Americans to play at the club and never had to play in small jazz clubs again after this! Ella recorded a total of 8 songbooks with Verve between 1956 and 1964, and she interpreted much of what we know as The Great American Songbook. Ella made history again in 1956 by winning two Grammy’s at the first ever Grammy Awards Show and she was the first African-American woman to do so! She ended up winning 14 total Grammys in her career as well as winning the Kennedy Center Honor for lifetime achievement (1979) and the National Medal of Arts (1987). Ella was described to have clear tone, and her wide vocal range was complemented by her mastery of rhythm, harmony, intonation, and diction. 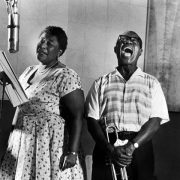 Check out the video below of Ella Fitzgerald singing “April In Paris.”