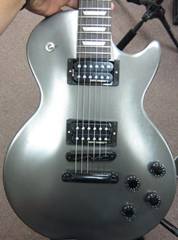 Using the woods returned from the 2 highly questionable raids the US Government did on their factory in Nashville, Gibson has decided to release the new Government series of guitars. Limited in number, these guitars feature a ‘Government Grey’ finish, classic Dirty Fingers model pickups and come in new olive green hardshell cases. 300 Les Pauls, 175 SGs, 100 Explorers and 100 Flying Vs are all that are being built.