Are you ready for the two most exciting minutes in sports?

Willis Music wants to help you “Hit the Trifecta” and reward your loyalty. The week leading up to the Derby is a very exciting time, and we want to be part of that excitement. Here is what you have to do, make a purchase between May 2 and derby post time on the 7th, pick the horse you think will win the Kentucky Derby, and if you are right, we will credit your Music Money account with triple the Music Money dollars from your purchase. It really is that easy, you pick the winning horse and get some extra Music Money! Stop by the store anytime between May 2 and 7 before post time for your chance to Hit the Trifecta! 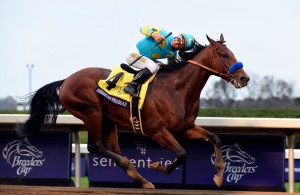 American Pharoah (foaled February 2, 2012) is an American Thoroughbred racehorse who won the American Triple Crown and the Breeders’ Cup Classic in 2015. In winning all four races, he became the first horse to win the “Grand Slam” of American horse racing. He was voted the 2015 Eclipse Award for Horse of the Year and the 2015 Eclipse Award Champion three-year-old. He was bred and owned throughout his racing career by Ahmed Zayat of Zayat Stables, trained by Bob Baffert, and ridden in most of his races by Victor Espinoza. He now stands at stud at Ashford Stud in Kentucky.

Click here to visit the closest Willis Music location to you.