The month of February is Black History Month. All month long we will be celebrating African-American musicians from the last 100+ years! Today we are highlighting Jimi Hendrix!

James Marshall “Jimi” Hendrix (1942-1970) is considered one of the most influential rock musicians from the 20th century. He did things on the electric guitar that people couldn’t have even dreamed of! He pioneered much of what we see rock guitarists doing today. He was entirely self taught and completely enamored with the guitar, but his start was anything but ideal and easy.  His father Al was in the Army when Jimi was born, so he was unable to see his son until he was granted an honorable discharge three years after his birth. Al was unable to secure work which left the family impoverished.

They were unable to afford to buy Jimi a guitar, so he took to carrying around a broom all of the time pretending it was a guitar. Jimi was drawn to musicians such as B.B. King, Muddy Waters, Howlin’ Wolf, Buddy Holly, and Robert Johnson. He and his father were helping a woman clean out her house and Jimi found an old ukulele that only had one string she allowed him to keep. He taught himself to play it by ear. In 1958, Al was able to purchase Jimi an acoustic guitar for $5 and he immediately joined a band called The Velvetones but it didn’t take him long to realize he needed an electric guitar so he could be heard. His father got him a white Supro Ozark 1560S and he joined The Rocking Kings. 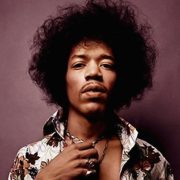 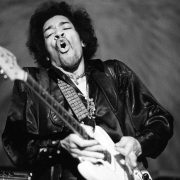 His time with The Rocking Kings was brief because in 1961, he joined the Army where he was able to form a band called The King Casuals with bassist Bill Cox. After only a year he was granted honorable discharge due to an ankle injury he got during a parachute jump. Upon his return home he tried out his hand as a session guitarist under the name Jimmy Hendrix, playing backup for artist such as Tina Turner and Little Richard. When he decided he wanted to be a lead guitarist he formed his band Jimmy James and the Blue Flames. He was discovered in 1966 by Chas Chandler who signed him to a deal, moved him to London, changed his name to Jimi and created the Jimi Hendrix Experience. They produced well known singles such as, “Purple Haze”, “The Wind Cries Mary” and “Foxy Lady”, and became one of the most popular touring acts in the world. The group broke up in 1968, because the demands of touring were taking a toll and Jimi was beginning to focus more on his music making and taking more control of his sound.

We all know the famous Summer of 69’ when Jimi played an eccentric version of the “Star Spangled Banner” on his guitar which sent the audience in an excited frenzy. He reformed the Jimi Hendrix Experience in 1970, but sadly was unable to see the project to its end due to his untimely death from drug-related complications. He lived a short life but left his unique mark on the world of Rock and Roll.

Check out the video below of Jimi Hendrix performing “Purple Haze.”