The month of February is Black History Month. All month long we will be celebrating African-American musicians from the last 100+ years! Today we are highlighting John Coltrane!

John “Trane” Coltrane was a jazz saxophone virtuoso who lived from 1926-1967. He was born in the small town of Hamlet, North Carolina, but was raised further north in High Point, North Carolina. Both of Coltrane’s grandfathers were ministers within the African Methodist Episcopal Zion Church denomination. Much of his music and spirituality grew out of experiencing worship and music in the church as a child. Coltrane picked up the clarinet in middle school, but switched to saxophone in high school. Some Coltrane historians have commented on his dedication by saying that the musician would often fall asleep with the saxophone still in his mouth. Coltrane enlisted in the Navy in 1945, mostly to avoid being drafted into the Army. Coltrane’s musical prowess was recognized pretty early on in his military unit, and his superiors placed him in the all-white jazz band the Melody Masters. However, Coltrane was only considered a guest musician in the group because of his race.

Following his time in the Navy, Coltrane moved to Philadelphia to immerse himself in the growing bebop scene. Here he toured with bands led by King Kolax, Jimmy Heath, Eddie Vinson, Dizzy Gillespie, Earl Bostic and Johnny Hodges. Miles Davis selected Coltrane as the saxophonist for his new group in 1955, known as “The First Great Quintet”. The quintet disbanded after a few years, due in part to Coltrane’s addiction to heroin. Coltrane soon joined musical forces with Thelonious Monk and played at the Five Spot Café. They produced one live album together, Thelonious Monk Quartet with John Coltrane at Carnegie Hall, which was very well received by audiences and critics alike. 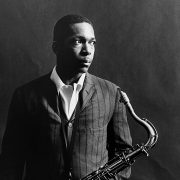 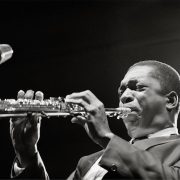 As a bandleader, Coltrane produced well-known albums Blue Note, Giant Steps, My Favorite Things, and A Love Supreme. The latter was a musical response to Coltrane’s self-described spiritual awakening in 1957, which gave him the strength to overcome addictions to heroin and alcohol. Many of Coltrane’s albums that followed had some sort of personal spiritual significance. After his death in 1967, a San Francisco-based church renamed itself to St. John Coltrane African Orthodox Church, celebrating the heritage of a spiritually influenced African-American musician. Coltrane’s legacy has left more of a mark on the jazz world than it has on American spirituality, but by mirroring his spiritual journey in his music, Coltrane has held a unique place in jazz history. Coltrane was inducted into the Jazz Hall of Fame and the North Carolina Hall of Fame, has received a Grammy Lifetime Achievement Award, and received a special Pulitzer Prize in 2007 for his iconic part in jazz history. Though he lived for only forty years, John Coltrane left quite an impressive mark on jazz in the middle of the 20th century.

Check out the video below of John Coltrane and his quartet performing “Afro Blue.”