The month of February is Black History Month. All month long we will be celebrating African-American musicians from the last 100+ years! Today we are highlighting John Legend!

John Roger Stephens (b. 1978) is better known professionally as John Legend. He is an American singer, songwriter, musician, and actor and hails from our good old state of Ohio. Born into a musically gifted family, he was exposed to music at a young age. He was what some would consider a child prodigy. At the age of four he began to learn how to play the piano, started singing for his church’s choir by the age of seven, and by eleven he was leading the church choir.

His talents did not stop at music he was also very gifted academically. He graduated high school at the age of 16, and was offered admission to Harvard, Georgetown University, and Morehouse College, but decided to attend the University of Pennsylvania. He joined the student a capella group Counterparts and later became the group’s president and musical director. The group’s recording of Joan Osbourne’s “One of Us” with Legend on lead vocals received critical acclaim and was included on 1998 Best of Collegiate a Cappella compilation CD. A friend introduced him to Lauryn Hill, who was impressed with Legend’s keyboard skills and gave him a part playing piano on her song, “Everything is Everything” which would become a huge hit. 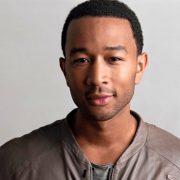 Upon graduating in 1999, Legend acquired a job with Boston Consulting Group but his passion for music was as strong as ever. He played gigs at nightclubs and even produced two solo albums that he would sell at his shows until he decided to quit his job and pursue a career in music full time. He didn’t get his “big break” until 2002, when his college roomate introduced him to Kanye West. Through Kayne, Legend was able to provide backup vocals for big names such as Janet Jackson and Alicia Keys. Kayne was also using his endless talents on his album The College Dropout, and this is when poet J. Ivy gave him the idea to change his name to John Legend because he sounded like a soul singer from the old school, one of the legends. Legend was slowly building up his credibility and name until he was able to produce his debut album Get Lifted in 2004. Two years later his second album Once Again was released. From 2008-2010, he released two more albums, one of which was called Evolver, a title meant to portray Legend’s desire for his music to continually evolve and change.

Since 2011, John Legend has released two more albums producing hit singles such as “All of Me.” He also produced music for many hit movies like “Glory” that was featured in Selma and “Beauty and the Beast” for the 2017 version which was performed with Ariana Grande. He has won 10 Grammys so far in his very successful career. Music isn’t the only interest in his life though. He is also a huge philanthropist, raising awareness and money for organizations such as Teach for America, and supporting those affected by Hurricane Katrina. He sits on the boards of The Education Equality Project, the Harlem Village Academies, and Stand for Children. John Legend continues to find success within and outside of his music.

Check out the video below of John Legend performing “Bridge Over Troubled Water” live.