The month of February is Black History Month. All month long we will be celebrating African-American musicians from the last 100+ years! Today we are highlighting Louis Armstrong!

Louis Armstrong, otherwise known as Satchmo, was one of the most influential jazz musicians in history. He was born in New Orleans, Louisiana, on August 4, 1901. While he is mostly known for playing the trumpet, this wasn’t his only talent. He also was a composer, singer, and an occasional actor. He had a career that spanned five decades, but where did he get his start? When Armstrong was growing up in the extreme poverty stricken areas of New Orleans, jazz was still a very young genre. He dropped out of school in the 5th grade to work odd jobs to help support his family. Some of those jobs included singing on street corners, selling newspapers, and delivering coal. In 1912, he was sent to the Colored Waif’s Home for shooting a gun in celebration of the New Year. It didn’t turn out to be a bad experience for Armstrong because while there he learned to play the bugle cornet and to read music from Peter Davis. This is where his passion and love for music was really born. Joe “King” Oliver, one of New Orleans finest cornet players, became Armstrong’s mentor. He would give him pointers as well as occasionally using him as a sub in his band. Armstrong was eventually asked to be Oliver’s replacement in Kid Ory’s band, the most popular band in the area at the time. This allowed him to stop working odd jobs to focus on his music. It is was in the summer of 1919 that Armstrong really fine tuned his music reading skills and cornet playing when playing on riverboats with a band led by Fate Marable. Three years later King Oliver asked him to join his Creole Jazz Band in Chicago as the second cornet. With Oliver’s band, Armstrong made his first recordings as well as earning his first solo “Chimes Blues.” Satchmo continued to gain popularity in the Jazz world. He married Lil Hardin who was the female pianist in Oliver’s band and with her support he left and joined Fletcher Henderson’s orchestra in New York. He gained even more popularity with his play style but his Southern background didn’t mesh well with the more urban, northern mentality of the other members of the band. Another point of contention came when Henderson didn’t allow Armstrong to sing because he thought his voice was too rough for the sophisticated audiences they played for. 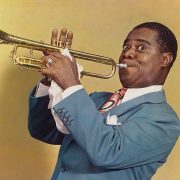 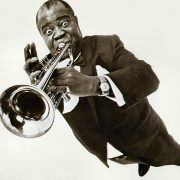 This led Armstrong to leave the group and return to Chicago. Upon his return, he joined his wife’s group the Dreamland Syncopators and also made the switch from cornet to the trumpet. He made a series of recordings with studio-only bands like The Hot Fives and The Hot Sevens. Armstrong helped change Jazz from an ensemble to soloist art. As Armstrong continued to become more well-known he started playing in venues like the Sunset Cafe with pianist Earl Hines. The two formed an unstoppable team and created some of the most well-known recordings today like “West End Blues.” Armstrong was famous by 1929, and once again moved to New York where he landed a role in the Broadway production Connie’s Hot Chocolates. Armstrong’s record allowed him to put his own spin on popular songs of his time and his daring vocals on these songs changed things and had lasting effects on other big names in the Jazz world like Ella Fitzgerald and Bing Crosby. Louis is one of the people who invented “scat-singing.” In 1932, he began touring in Europe and making movie appearances. He returned to Europe for a longer tour in 1933, and this is when he ran into some trouble with his career. All of those years spent blowing high notes took its toll on his lips. His manager Johnny Collins had an argument with Armstrong and then left him stranded in Europe. He took the time to rest his sore lips and relax and returned to Chicago in 1935. He asked Joe Glaser to help him restart his career and he did just that by setting Armstrong up with a big band and a new record deal with Decca Records. With Glaser as his new manager, Armstrong made many movie and radio appearances as well as playing with his band. After he and Lil separated in 1938, he had a brief marriage with Alpha Smith until marrying the woman he would be with until the day he died, Lucille Wilson. When the swing era died down in the 40’s, Armstrong broke up his big band and formed a small six-piece combo band called The Allstars. This is the band Armstrong performed with until the end of his career. Armstrong was a major influencer in the Jazz world. He also had many firsts as an African-American in his career including first African-American jazz musician to write an autobiography: Swing That Music. He was the first African-American to get featured billing in a major Hollywood movie with his turn in Pennies from Heaven, and also the first African-American entertainer to host a nationally sponsored radio show in 1937. Armstrong died of a heart attack at the age of 69 in 1971.

Check out the video below of Louis Armstrong playing “When the Saints Go Marching In” on Trumpet.