The month of February is Black History Month. All month long we will be celebrating African-American musicians from the last 100+ years! Today we are highlighting Miles Davis!

Miles Dewey Davis III (1926-1991), known professionally as Miles Davis, was a talented and innovative jazz trumpet player. He was born in Alton, Illinois, a suburb of St. Louis, Missouri. His mother was a musician and music teacher who encouraged his musical interests in blues and gospel music, although she wanted Miles to take up violin instead of trumpet. Davis’ first trumpet teacher, Elwood Buchanan, seriously discouraged the use of vibrato, which is the sole inspiration for Davis’ straight and clear tone. As a teenager, Davis played in several bands in the St. Louis area, including his high school marching band. After graduating, Davis moved to New York City to be “where the action was”, and enrolled in what is now known as the Julliard School, one of music’s most renown academic institutions. Davis also made the move to New York City to be closer to his idol, Charlie Parker.

Davis’ professional career officially began after he dropped out of Julliard to play with Charlie Parker’s bebop quintet. After four years in Parker’s group, Davis left to create his own groups and further develop his personal styles. With his nonet in 1949-1950, he released Birth of the Cool, an album that was given credit for the creation of cool jazz In the early to mid-1950’s, Davis’ style evolved into what became known as hard bop, an extension of jazz and bebop with repetitive driving rhythms. Later in his career, Davis utilized more sounds and styles of popular music, which brought him wider recognition in the 1980’s, yet received poor reviews from jazz critics. His long lasting career spanned five decades, and Davis was consistently at the forefront of new stylistic developments within jazz. He performed with many jazz legends throughout his career: John Coltrane, Cannonball Adderley, Bill Evans, Sonny Rollins, Dizzy Gillespie, Sonny Stitt, Wayne Shorter and Thelonious Monk, to name a few. 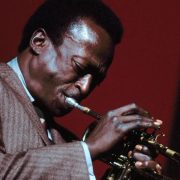 Many of Miles Davis’ albums are held in high esteem among some of jazz music’s best. During his career Davis recorded dozens of records with companies like Prestige/Blue Note, Columbia and Warner Brothers. Some of his most notable studio albums include Birth of the Cool, Blue Period, Blue Moods, ‘Round About Midnight, Miles Ahead, Kind of Blue, Bitches Brew and Tutu. Davis also produced several live albums throughout his career. The impact that Davis made on jazz music is unmatched by most of his peers. The breadth of Davis’ artistic and stylistic development, along with his clear and straight tone, make him one of the most recognizable musicians of the 20th century. Davis was inducted to the Rock and Roll Hall of Fame in 2006, and has received numerous prestigious awards and recognition’s for his illustrious career. Stars on the Hollywood Walk of Fame and St. Louis Walk of Fame pay tribute to one of the most widely respected musicians jazz music has ever known.

Check out the video below of Miles Davis performing “So What” on the trumpet.