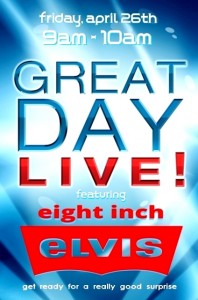 Willis Music Louisville store manager, “Mohawk” Mike McAfee returns to TV this Friday, April 26, as his band Eight Inch Elvis make their fifth appearance on WHAS 11′s Great Day Live morning show. Hosts Terry Meiners and Rachel Platt have joined in the fun on many occasions, and this week’s visit is sure to be a repeat of the laughter. The band is doing 2 songs, and the first is sure to cause a few eyebrows to raise. The show is on from 9am until 10am on WHAS 11. Eight Inch Elvis has been voted Best Rock Band and Best Cover Band twice by the readers of LEO Magazine.