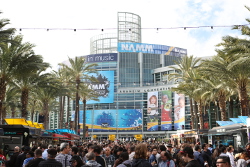 I just attended my 35th January NAMM show. Yes, my first one was at 21 years old. For those of you who are unaware of NAMM, it’s the trade association of the $17 billion dollar music products industry. NAMM began in 1901 making it 2 years younger than Willis Music.

Our yearly pilgrimage to NAMM is always a welcome retreat from our cold winters. We go to sunny Anaheim and this year the weather was fantastic. I travel with 3 buyers from Willis (Paul, Bill and Mike) and my wife Debbi. Our buyers spend most of their time visiting vendors like Yamaha, Fender, Steinway, Hal Leonard and hundreds more; placing orders and learning about new products. My time at NAMM is involved with meetings with some of our larger vendors along with meetings with each of our foreign sub-publishers. As many of you know Willis owns a catalog of educational piano music with names like John Thompson, Edna Mae Burnam and William Gillock. Those publications and more are in great demand in other countries so I use the NAMM show to meet with our partners representing the countries of Japan, China, England, Australia, South Africa and other parts of Europe. In some cases working with translators which I always find interesting. Our John Thompson Piano Course is now printed in 17 languages.

That’s a bit about our main jobs at the show but there is much more. For me, the show is a reunion of some of my best friends. I was fortunate to be asked to serve on the executive committee of NAMM for 8 years which ended in 2013. My final 2 years I was the Chairman of NAMM and traveled around the world meeting so many great people. I love reconnecting with all of them each year at the NAMM show. In a later edition I’ll write about some of our most memorable experiences during that time. For me, this year’s highlight was the annual Yamaha concert. They hold a concert every other year or so in DisneyLand at the Hyperion Theater. The artists are unbelievable. This year’s highlight for Debbi and me was Jamie Cullum. If you don’t know Jamie, do yourself a favor and check him out. Also performing were The Piano Guys, James Blunt, Jonathan Butler, Bob James, Colbie Caillat, Nathan East and others. The MC was Sinbad and he was a riot. The show was 3 1/2 hours long and was amazing. Jonathan Butler was the surprise for us; such an amazing voice. And Colbie Caillat has such a clear distinctive voice, she was really good too.

One last thing, check out this video of The Piano Guys at a retirement home. Watch the change in the residents as the Piano Guys perform, it’s amazing. The benefits of music in action.

Paul (one of the Willis buyers) attended a concert put on by Vandoren called VandoJam. Several Grammy winning Jazz artists really killed it. It featured Paquito D’Rivera, Eric Marienthal, and Jerry Vivino, with special guests Felix Peikli and Farnell Newton. That is one of the most exciting things about the show. Artists are everywhere and each company tries to provide the best performances you will ever hear. You can be walking the halls and see Jason Mraz, John Mayer or even Stevie Wonder. I was fortunate enough to meet Stevie last year. I remember one year when Stevie Wonder just started playing in the Yamaha booth; not planned… just spontaneous artistry at it’s best.

It’s All About That Band! This Is How It Gets Done!
Scroll to top