The month of February is Black History Month. All month long we will be celebrating African-American musicians from the last 100+ years! Today we are highlighting father/daughter duo Natalie and Nat King Cole.

Nat King Cole passed a love of music on to daughter Natalie Cole. Natalie was a singer, songwriter, and actress born on February 6, 1950. As the daughter of Nat King Cole she grew up being exposed to many of the greatest jazz, blues, and soul singers we know today. When she was just 6 she got to sing on her father’s Christmas album, and by the time she was 11 she was performing. Her father died when she was only 15, which no doubt left a mark on her life. She rebelled against the style of music her father sang because it brought up painful memories for her. She distanced herself from her father’s legacy because she didn’t want people to only like her because she was his daughter. She attended the University of Massachusetts Amherst and graduated with a degree in Child Psychology in 1972. While in college, she realized music is what she wanted to do with her life. After graduation she began singing with a group called Black Magic in nightclubs and eventually she caught the attention of two producers, Chuck Jackson and Marvin Yancy, who wanted to create a few albums with her. Once they were produced, they started passing her music off to record labels hoping one would sign her. Every record company but one turned them down. However, Capitol Records – which happened to be her father’s label – agreed to sign her in 1975. 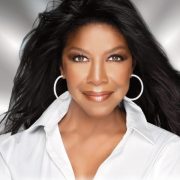 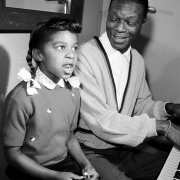 Her first album with Capitol Records, Inseparable, received two Grammy Awards in 1976. Natalie Cole became the first African-American to win Best New Artist. She enjoyed great success in the 1970’s including the release of five albums, two platinum records, and number of hits. She was honored with a star on the Hollywood Walk of Fame in 1979. After she released her 8th album she hit a rough patch in her personal life. Among many personal issues she was facing she was battling a heavy drug addiction and all of these things caused her career to suffer. But Cole did not let this stop her from achieving her goals and dreams. After a brief stay in a rehab facility she was able to overcome her drug addiction and with hardwork and dedication she climbed her way back to the top. After a few record label changes and a few attempts at albums she finally regained success with Everlasting in 1987. The album included three singles that all reached the top 20 on the Pop Charts, surging her back into stardom. In 1991, Cole did something unforgettable. This was the year her album Unforgettable… with Love was released. A turning point in her career, she embraced her last name and began singing more of her Father’s style. The album included 20 songs from her father’s collection but the most intriguing of all was “Unforgettable.” With the help of recording gear she was able to do a duet of the song with her father using his original recording. The album won a total of 7 Grammys. She once again followed in her father’s footsteps and decided to record her first and only all spanish album in 2013. The inspiration and influence came from a Salvadoran nurse whose niece suddenly died and was a perfect match for a kidney donor for Cole who was in liver failure. This connected her even more to Latin American culture and gave her the push she needed to produce the all Spanish album Natalie Cole en Español. She did not want this album to be compared to her father’s, so she clarified it was not a tribute to her father but to Latin American music because of her father. The language came naturally to Cole and she produced a well-received album which would be her last. She performed until she became too ill to do so anymore. She died due to congestive heart failure on New Year’s Eve in 2015. She enjoyed an incredibly successful career, not at all overshadowed by her father’s successful career as she worried about early on.

Check out the video below of Natalie and Nat King Cole Singing “Unforgettable” together.