The month of February is Black History Month. All month long we will be celebrating African-American musicians from the last 100+ years! Today we are highlighting Pharrell Williams!

Pharrell Williams (b. 1973) is an American singer and songwriter. Born in Virginia Beach, Virginia, Williams’ talent was discovered during a high school talent show along with his partner Chad Hugo. They signed a record deal with Virgin Records in 1992, and created the duo called the Neptunes. The Neptunes produced music for artists like Jay-Z, Nelly, Daft Punk and Britney Spears. Williams and Hugo added another friend, Shae Haley, to create the hip hop/rock band N*E*R*D. The group has been together off and on since 1999, most recently releasing their 2017 album No One Ever Really Dies. The new album includes collaborations with Rihanna, Ed Sheeran and Kendrick Lamar.

Williams produced his first solo album, In My Mind, in 2006. Debuting at #3 on the US Billboard 200, the record included songs that featured Gwen Stefani, Snoop Dogg and Kanye West. In My Mind received a nomination for Best Rap Album at the 2007 Grammy Awards, and also reached the top 10 in the UK, Norway, Japan and Canada. Williams continued to produce songs and albums for Beyonce, Madonna, Miley Cyrus and Adam Lambert. 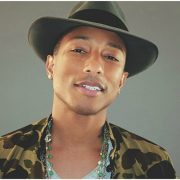 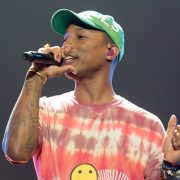 Pharrell Williams’ popularity reached a wider audience when he wrote songs for the Despicable Me and Despicable Me 2 films that came out in 2010 and 2013, respectively. “Happy”, from Despicable Me 2, became Williams’ most successful hit. The song reached #1 in the United States and over twenty other countries. “Happy” was nominated for Best Original Song at the 86th Academy Awards, but lost to “Let It Go” from Frozen. Williams did win a Grammy for Best Solo Pop Performance for a live version of the song.

Since Despicable Me 2, Williams has experienced success in a variety of ways. His second solo album Girl was released in 2014, reaching #2 in the US Billboard 200 and #1 in R&B/Hip Hop. Williams continued his usual inclusion of other artists with this album, featuring Justin Timberlake, JoJo and Alicia Keys, among others. Williams replaced CeeLo Green as a coach on NBC’s The Voice in 2014. He composed the Hidden Figures soundtrack in 2016, alongside Hans Zimmer. Pharrell Williams continues to create music as a singer, instrumentalist, composer and producer. The variety of his skills has contributed to his great success.

Check out the video below of Pharrell Williams’ official music video for,“Happy.”