Piano Teacher Comes up with a Clever Way to Keep Students Interested in Music!

You are here: Home1 / home2 / Piano Teacher Comes up with a Clever Way to Keep Students Interested in...

During the MTNA Conference, our President Kevin Cranley met a teacher by the name of Carmen Still from Washington. Kevin’s interest was piqued when Carmen began to explain the concept of a progression board for teachers to use with their students. It not only keeps track of her students’ progress through the Dozen A Day Series, but it also provides a bit of a competitive edge for her students! Below is an excerpt from Carmen explaining the Dozen A Day Board. 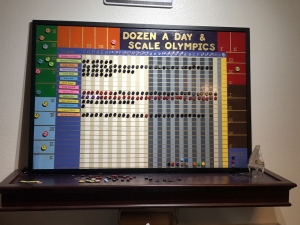 “I made it in my garage with a piece of sheet metal, several cans of spray paint, some stickers and a whole lot of painter’s tape, and mounted it in a poster frame.  Each student has a magnet with their name on it, made with a 1″ round craft magnet and some scrapbook supplies.”

The border of the board corresponds to the Dozen a Day levels Prep through 4.  When I made the board, I was unaware that the Mini book existed, and now I tell students that they must first complete the pink book in order to ‘get on the board’.  Each color section is labeled to match the Groups in each book, and students progress around the periphery as they work through the series.

In order to pass each exercise, it must not only be played with correct notes and fingering, but must also be counted aloud.  There are a few that are written without meter; these are ‘counting freebies’ (no counting aloud), and much enjoyed by students!  There are a few in the series that were printed without time signatures but are definitely in a countable meter, and if students are looking closely enough at the page to spot that and can correctly identify the missing meter, then they don’t have to count.  Once they’ve missed the first one, and subsequently find out that this was a possibility, they tend to scan the score like hawks! (So – don’t change those, please.) Two in each group must also be done with metronome. Students get to choose which two, and what speed, but if I have to re-assign any exercise due to lack of steady pulse, then it has to be done with metronome, and I pick a tempo range.  Many times, I’ll tell kids that exercises that progress from quarter to 8th to 16th notes are “probably going to end up with metronome”, and they’ll go home and practice like mad with it on the sly ‘to beat me at my own game to get out of it’. 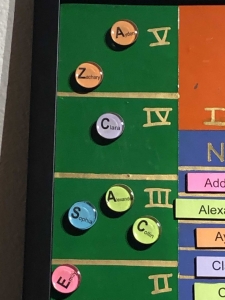 A close up of the students magnets that keep their progress

The center of the board is dedicated to scale-cadence-arpeggio sets.  I have used the Bastien Scales, Chords and Arpeggios book, (the one with the beautiful waterfall on the front), for years as a leaping off point. When each student starts, I hand them the book and tell them, “In a year or so, you’re going to have this entire book memorized and will be playing these in a harder version than what’s written.”  They’re always very skeptical, but quite proud when many months later, they can proudly announce to their parents that they have, in fact, achieved this!

Each student has a line in the Scale Olympics area dedicated to them.  The white/beige area are major scales; the blue/gray area are minors. The 1/2″ magnet color corresponds to level.  Black is hands alone; red is hands together, parallel. Purple is contrary motion. Cadences and arpeggios are done in contrary motion as well; I find that they really solidify their chord knowledge when they’re playing their cadences in two different inversions!  Gold is 3rds, 10ths and 6ths, and I choose which hand starts cadences in which inversion on the spot, plus the number of octaves that the arpeggios will go. Orange is octaves… etc. I have created ten different levels for scales over the years as students kept racing to finish and needed more levels.  Additional levels include Grand Scale Form, metronome work, improv in classical and blues styles, and composition. We moved a couple years back, so I am rebuilding my studio and currently only have students in black, red and purple.

I start students at two octave scales and arpeggios (hands alone), and cadences in all three inversions, and then move on from there.  Students are ‘allowed’ to start scale/cadence/arpeggios when they have completed Dozen a Day up through Book One (green), Group III, Exercise 1: Deep Breathing. This tends to be a major motivator because they want to start building up those center area magnets and catch up with those more advanced kids!

The last three columns in the scales work as follows:  The first two “M” columns are 60-second challenges. They must play all 12 enharmonic scales (M=major, m=minor) in under 60 seconds in order to earn those magnets.  The leveling for that is slightly easier than what they’ve done for the sets in that level. For example, black is hands alone (each hand gets a full minute), and must only be one octave instead of two.  Once they have earned a magnet for each key, major and minor, plus both challenges, then they get a prize. Here in the Yakima Valley, we have a local shop called “Mom’s Candied Apples”, so the current Scale Olympics prize is a $10 gift certificate for that shop.  In the past, I have had the magnets “expire” at the Spring and Fall Recitals, so they really have to work to earn those prizes. I will generally take the board and set it on an easel in the reception area for parents to admire and kids to show off; the next week, the center area is blank and they start again from wherever they left off.  Currently, since we’re in a building season, we haven’t had magnets “expire” for over a year, and a couple students are working very hard to take ‘advantage’ of this situation before I wake up and figure out what they’re up to. 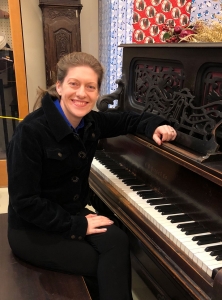 The final, yellow column labeled “DD” is the Dozen a Day Column of Completion.  Once they’ve finished the series, their circle magnet goes in that column to show the world that they have successfully completed the Dozen a Day series as written.  In my previous studio, there were quite a few magnets in that column, which was a major bragging point for a number of kids.

When I taught in the Seattle area, I had several sets of students that would compete furiously to beat each other out at Scale Olympics and Dozen a Day, and it wasn’t unusual to get a call on a weekend from students nearby asking if they could please drop in and pass a group of Dozen a Day or a couple scale sets so that they could go to the next set and “get ahead of Johnny”.

I was introduced to the Dozen a Day series about 20 years ago from a veteran piano teacher that discussed it a chapter meeting for our local music teachers association, and decided that I liked the technique mix, the steady progression and spiral approach, and the length of the exercises for the average student.  I find that they aid greatly in teaching theory and transposition, as well as finger groupings and memorization in patterns. I presented my technique and scale method approaches using my board and the books as visual aids for my local chapter a couple years ago, which was well received. I have several former students who have gone on to become professional teachers that use this series with their students.  One of my favorite phone call/emails from former students goes something along the lines of, “Mrs. Still, now that I’ve started teaching, I get why you had us use Dozen a Day and count EVERYTHING out loud, and since I’ve started doing that with my students, they’re doing a lot better!” Warm fuzzies all around.”