The month of February is Black History Month. All month long we will be celebrating African-American musicians from the last 100+ years! Today we are highlighting Ray Charles! 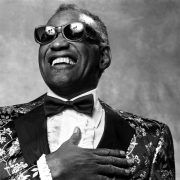 Ray Charles Robinson was an American singer, musician, and composer who is one of the pioneers of 1950’s Soul music. He melded together gospel, blues, and rhythm and blues to create the unique sound of soul.

Ray’s passions and love for music grew at the young age of three when he saw Wylie Pitman play “Boogie Woogie” on an upright piano at the cafe he owned and then began teaching Charles how to play. Tragedy struck his family when he was just five years old when he watched as his brother George accidentally drown in a wash tub and was unable to pull him out. At the age of six he started to lose his eyesight due to what they believe was untreated glaucoma and by seven he was completely blind. He reluctantly agreed to attend Florida School for the Deaf and Blind in St. Augustine from 1937 to 1945. Here he was able to study composition and how to write music in braille and learn to play alto saxophone, clarinet, trumpet, and organ.

Tragedy struck again when he was 15 when his mother died. He left school shortly after and moved to Jacksonville and began touring with bands around Florida. He also dropped his last name because he didn’t want to be confused with the boxer Sugar Ray Robinson. Now an orphan he decided to move to Seattle with the money he had saved up from working with different bands. It was here that he recorded his first record. This was also where his life-long friendship with Quincy Jones was started. While in Seattle he and Gossady McGee formed a band called McSon Trio which was a combination of their last names. The trio made their first recording in Los Angeles in 1949.

he 1950’s were busy for Charles. He produced two more hits “Baby Let Me Hold Your Hand” and “Kissa Me Baby”. He also began a national tour with Lowell Fulson. He was able to  record one of his own compositions which became one of his most well- known hits, “I Got a Woman”. Charles mixed gospel, jazz and blues elements together when co-writing “I Got a Woman” and it was called Jump Blues. This song is said to have strongly influenced Rock and Roll and Soul Music. Over the next several years he had produced many hits that caused him to become a major figure in R&B. His contract with Atlantic Records expired in 1959, and he started a new contract with ABC-Paramount Records. His first hit single with the new label was recorded in 1960, a rendition of the very popular Hoagy Carmichael tune, “Georgia on my Mind”. The following year he produced yet another hit single, “Hit the Road Jack”. Both songs eventually won him Grammys. He took a year long hiatus from his career from 1965-1966 to kick a life long drug habit and upon his return he immediately continued achieving success by producing more hits and winning another Grammy.

Charles had become outspoken on the matter of segregation after experiencing racial injustice at a club he played at. He provided Martin Luther King Jr. with financial support rather than physical support since he was blind.  He received a huge honor in 1979, when “Georgia on My Mind” was selected as Georgia’s state song.  On June 10, 2004, after a long life of amazing accomplishments and standing up for his beliefs, he died of acute liver disease. His last album, “Genius Loves Company” was released two months after his death and it won eight Grammy awards. Ray Charles won a total of 17 Grammy’s in his lifetime. 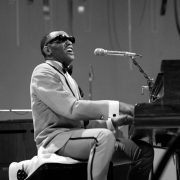 Check out the video below of Ray Charles performing “Georgia On My Mind.”