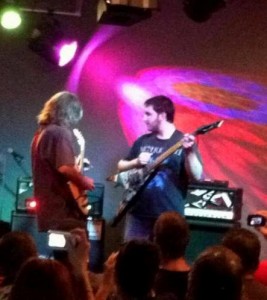 We’re all about giving musicians some glory here at Willis Music, and one of our most popular annual events is Shred Fest. This year we had 21 guitarists post 60 second videos of themselves “shredding”. The top 7 with the most “likes” came into our store on September 28, were split into 2 groups and played live in our auditorium for a packed house of guitar worshipers. Judging for this portion of the contest was done by 2012 Shred Fest winner Chris Alia and Louisville musician and educator, Brian White. The winners from those groups, Monte Phillips and Cheyenne Powell,  then went head-to-head against each other in hopes of winning a brand new B.C. Rich Flying V guitar. Judging for this portion of the event was based entirely on audience response. At the end of a spectacular guitar battle, Cheyenne Powell of local band Overload walked away the winner. Thanks very much to everyone who played, voted and came out to support musicians who’ve worked incredibly hard on their abilities. 2014′s Shred Fest will be the first to feature a backing track entry video, so start prepping now! 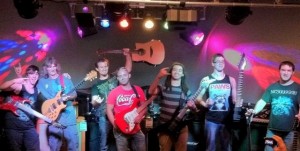 The final 7 left to right are: 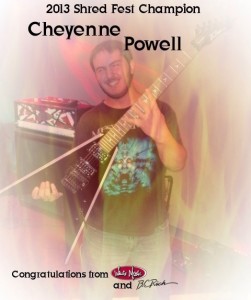