The month of February is Black History Month. All month long we will be celebrating African-American musicians from the last 100+ years! Today we are highlighting Stevie Wonder!

Stevie Wonder was born Stevland Hardaway Judkins in Saginaw, Michigan, in 1950. He was six weeks premature and has been blind since shortly after his birth. He got his first exposure to music singing in a baptist church as a child in Detroit and performing on street corners with a buddy. Considered a child prodigy, he signed with Motown’s Tamla Records in 1961, at the age of 11. Wonder’s first two albums, The Jazz Soul of Little Stevie and Tribute to Uncle Ray, were both released in 1962, but did not achieve much success. He joined the Motortown Revue at the end of that year and began touring with them along the chitlin’ circuit of venues that promoted black musicians. One of Wonder’s encores on that tour, “Fingertips”, was recorded and released as a single, and became his first #1 hit, making him the youngest musician to ever top the Billboard Hot 100.

Wonder showed promise as a songwriter in addition to his performance presence. He wrote “Tears of a Clown”, which reached #1 for Smokey Robinson and the Miracles in 1970. After a brief stint of independent recording, Wonder resigned with Motown in 1972, and released Music of My Mind, an album that incorporated social and political themes about which he felt strongly. His album Talking Book was also released in 1972, and included No. 1 hits “Superstition” and “You Are The Sunshine Of My Life”. Wonder won three Grammys for Album of the Year in the 1970’s in recognition of his work on Innervisions (1973), Fulfillingness’ First Finale (1974), and Songs in the Key of Life (1976). Some of his biggest hits in from the 70’s include “You Haven’t Done Nothin’”, “Higher Ground”, “Isn’t She Lovely?”, “I Wish” and “Sir Duke”. 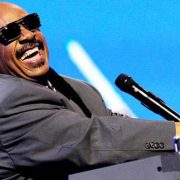 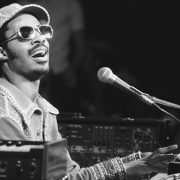 The 1980’s saw an increased involvement in commercial music for Wonder. He performed “Stay Gold” on The Outsiders soundtrack, and composed the entire soundtrack for The Woman in Red, which included his #1 hit “I Just Called To Say I Love You”. Wonder collaborated with artists such as Dizzy Gillespie, Paul McCartney, Elton John, Barbara Streisand, John Denver, Bruce Springsteen and Michael Jackson. He hosted an episode of Saturday Night Live in 1983, and performed his song “Overjoyed”.

Stevie Wonder was as much an activist as he was a musician. Wonder campaigned for Dr. Martin Luther King, Jr.’s birthday to be reserved as a national holiday. He accepted his Academy Award for Best Original Song in the name of then-imprisoned Nelson Mandela, causing his music to be banned from South African radio for a time. “How Come, How Long”, a 1997 collaboration with musician Babyface, explored issues of domestic abuse following the Nicole Brown Simpson case. Wonder performed at the 2002 Winter Paralympic Games in Salt Lake City, and at the inauguration of President Barack Obama in 2009. He has also performed countless benefit and advocacy concerts, and at the funerals of esteemed performers Michael Jackson, Etta James, and Whitney Houston.

Wonder’s musical tenure has received many awards and well-deserved recognition. He received 25 Grammy Awards and a Grammy Lifetime Achievement Award. He has been inducted into both the Rock and Roll Hall of Fame and the Songwriters Hall of Fame. Wonder received honorary doctorate degrees from University of Alabama at Birmingham in 1996, and Yale University in 2017. Rolling Stone Magazine ranked him as the 9th best singer of all time. His collaborations reached across the lines of music genres, and his social and musical influence will continue to inspire musicians and activists alike.

Check out the video below of Stevie Wonder performing, “Isn’t She Lovely.”