You are here: Home1 / Gary Ingle

My wife Debbi and I were honored to attend a very special event this past Friday in Cincinnati.  Recently, MTNA moved into a beautiful new headquarters in Cincinnati. The offices were most recently occupied by a Cincinnati law firm and are richly decorated.  Gary Ingle (MTNA CEO) and Brian Shepard (MTNA COO) were approached by the landlord to take an additional space at an extremely attractive price.  While not in the original plans, Brian and Gary envisioned a recital hall where pianists could perform and music lovers could enjoy live piano performances.  After securing the room, they approached longtime partners Steinway and Sons, and Willis Music about securing a piano for the space.  Steinway and Sons supplied the piano and Willis took care of the delivery which was a challenge in itself.  Their offices are in the PNC tower which when built in 1913 was the fifth tallest tower in the world.  The only problem with this beautiful historic building is that it doesn’t have freight elevators and the passenger elevators are extremely small.  We carefully measured and determined that we could fit a Steinway and Sons Model S. Regardless of our careful measurement our fingers were crossed on the day of the move and it went off without a hitch.

This inaugural concert was held in conjunction with the MTNA Board of Directors Meeting with board members and friends present.  Steinway Artist and CCM Eminent Scholar, James Tocco performed and certainly showed off all this beautiful piano is capable of.  He entertained everyone in attendance with not only his music but entertaining stories about the music he chose.

Steinway and Sons and Willis Music were pleased to be asked by MTNA to partner in bringing another live music venue to MTNA members and the music community of Greater Cincinnati. 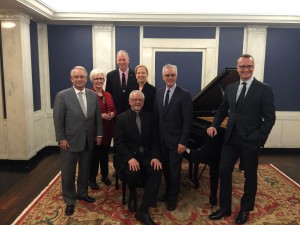