The month of February is Black History Month. All month long we will be celebrating African-American musicians from the last 100+ years! Today we are highlighting Thelonious Monk!

Thelonious Sphere Monk (1917-1982) was a jazz pianist and composer, and has the coolest, most well-rounded name in 20th century music. Monk was born in Rocky Mount, North Carolina, but his family moved to New York City when he was six to seek a better life. This was part of a larger social movement that saw many African-American families move from southern rural areas to northern urban centers. Like most jazz musicians around that time, Monk was heavily influenced by the style of Duke Ellington, Count Basie and James P. Johnson. In contrast to many other jazz pianists, however, he taught himself how to play, beginning at age six.

Monk started playing publicly in his teens, touring with a traveling evangelist on the organ. In his later teens, he performed steadily at Minton’s Playhouse, where he would connect with several of jazz music’s most notable musicians. His tenure at Minton’s was one of the driving forces behind the creation of bebop, a swift, hard-swinging variation of jazz. Monk produced his first studio recording in 1944, with the Coleman Hawkins Quartet. This began a prolific career in recording, during which Monk put out over 20 albums. Some of his most well received records include Monk, Straight No Chaser, and Monk’s Blues. The list of musicians with whom Thelonious Monk collaborated is a who’s who of jazz greats: Sonny Stitt, John Coltrane, Sonny Rollins, Miles Davis, Art Blakey and Max Roach, among others. 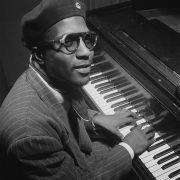 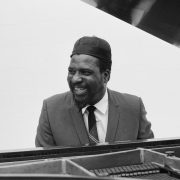 The personal life of Thelonious Monk was far more secluded than others in the jazz and bebop scenes. He had his New York City Cabaret Card revoked because he refused to testify against a friend who was arrested for drug possession while with Monk. This barred him from performing in any New York establishments that served alcohol after 1951. Monk suffered from mental illness and anxiety which contributed to his social seclusion. He died from a stroke in 1982.

Thelonious Monk posthumously received a Grammy Lifetime Achievement Award, a Pulitzer Prize, and was inducted to the North Carolina Music Hall of Fame. Monk’s family opened the Thelonious Monk Institute of Jazz in 1986, which aims to fuse jazz education with creativity, positive self-image, and tolerance for the cultures and background of others.

Check out the video below of Thelonious Monk playing “Don’t Blame Me” on the piano.