The month of February is Black History Month. All month long we will be celebrating African-American musicians from the last 100+ years! Today we are highlighting Thomas “Fats” Waller!

Thomas “Fats” Waller (1904-1943) was a jazz pianist and composer from Harlem. He started playing piano when he was six years old, and began playing organ at his father’s church when he was ten. By the age of fifteen, Waller was a professional musician, providing music at local theaters. A student of James P. Johnson, Waller learned and perfected playing in the stride style. Stride piano is a technique in which the left hand provides a rhythmic pulse, usually alternating between a single note on strong beats (one and three) and chords on the weak beats (two and four). This style required more mobility and dexterity in the left hand than other jazz styles at that point in time. 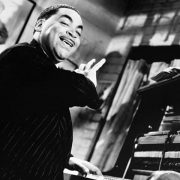 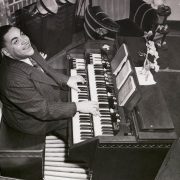 Waller offered more than just playing the piano in his performances. Though his piano skills were advanced enough to stand alone in a gig, he often included singing and comedy to enhance the entertainment experience. This made him one of the most unique and most popular acts of his day. Waller’s biography shares the account of the time he was kidnapped following a gig in Chicago. He was taken to a hotel, forced toward a piano and told to play with a gun at his back. He soon realized that the hotel was owned by Al Capone and that he was a guest at Capone’s birthday party. Rumor has it that was a lucrative engagement for Waller.

Fats Waller performed and recorded regularly between 1922-1941. His career took him to some of the largest cities in the United States, as well as the United Kingdom and Ireland. Waller died while on tour from complications from pneumonia in 1943. Two of his songs have been inducted into the Grammy Hall Of Fame: “Honeysuckle Rose” and “Ain’t Misbehavin’”. Many of his techniques and compositions have been replicated and recorded by other musicians.

Check out the video below of Thomas “Fats” Waller playing “Honeysuckle Rose” on Piano.