The month of February is Black History Month. All month long we will be celebrating African-American musicians from the last 100+ years! Today we are highlighting Wynton Marsalis!

Wynton Maralis (b. 1961) is an internationally renowned musician, bandleader, and educator who is equally comfortable playing in jazz and classical idioms. Born into a musical family in New Orleans, Marsalis picked up the trumpet at a young age and quickly showed promise. He was performing in church by the age of 8, and with the New Orleans Philharmonic by 14. His resume was eye-popping by the time he finished high school, having performed with the New Orleans Symphony Brass Quintet, New Orleans Youth Symphony, and the New Orleans Symphony, among others. Marsalis became the youngest member to ever join the prestigious Tanglewood Music Center, at only 17.

Marsalis moved to New York City and enrolled in the Juilliard School in 1979. His talents quickly attracted a lot of attention as he played around the city. He was signed by Columbia Records and recorded trumpet concertos of Haydn, Hummel, and Leopold Mozart. The record won him a Grammy for Best Classical Soloist with an Orchestra at the age of 20. Marsalis also began playing with Art Blakey and the Jazz Messengers around this time, and acquired bandleading skills from watching Blakey lead the group. After starting his own group in 1981, Marsalis toured heavily for the next 15 years, with over 120 performances each year. 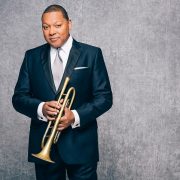 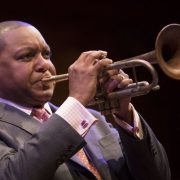 Director of the institution as well as Music Director for the Jazz at Lincoln Center Orchestra, positions he still holds today. Many of his compositions and arrangements have been performed by the group in the twenty years he has been its leader. Marsalis is also the Director of Jazz Studies at the Juilliard School.

Marsalis has accumulated many awards for his diverse career. He was the first artist to win Grammy Awards for both Jazz and Classical categories, and is the only artist to ever win Grammys in five straight years (1983-1987). The list of universities from which Marsalis has received honorary doctoral degrees includes Princeton, Penn, Columbia, Harvard, Yale, Brown, Boston University, Manhattan School of Music, Rutgers, NYU, and Northwestern. He received a Pulitzer Prize for Music in 1997, the National Medal of Arts from George W. Bush in 2005, and a National Humanities Medal in 2015. Marsalis continues to blend the arts and cultural awareness in his roles as musician and educator.

Check out the video below of Wynton Marsalis performs, “Jungle Blues.”